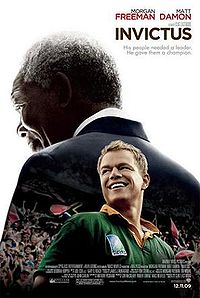 The second in a series, this article provides a preview of a movie you might like to see along with a vocabulary lesson for intermediate to advanced English learners. The selected vocabulary words are in bold and followed by succinct definitions. Sherlock Holmes was the previous article in the series – check back soon for the next.

Freeman’s Mandela is continually surprising his advisors and security personnel with his indefatigability (never getting tired) – as he charges out of his house for his pre-dawn (before sunrise) constitutionals (walking for exercise) at the beginning of marathon workdays – as well as with his emphasis on reconciliation (making harmony with your opponents or enemies) rather than recrimination in dealing with white South Africans.

In this spirit, Mandela makes the surprising decision to throw his whole-hearted (full, passionate) support behind the Springboks, the nearly all-white national rugby team that had become a hated symbol of oppression to most black South Africans. And so begins a remarkable turnaround (reversal of fortunes) for a team that seemed destined to make a poor showing as hosts of  the 1995 Rugby World Cup.

If you’re watching the film to practice your English, Freeman’s stately (majestic), measured eloquence as Mandela will give you a sporting (good enough) chance to understand the vocabulary the first time around.

Matt Damon as the Springboks’ captain Francois Pienaar is also not too difficult to understand as he echoes the calm, thoughtful, resilient (able to recover from adversity) tone of Mandela.

The grunting exertions of the rugby scenes are not so lengthy that they risk boring non-sports fans, and the underdog (not expected to win) status of the Springboks makes for stirring drama as their startling (very surprising) success is celebrated with boyish enthusiasm by Mandela.

In a quietly moving scene Damon’s character and the Springboks team visit the tiny (very small) Robben Island prison cell where Mandela spent 18 of his 27 years as a political prisoner. The song 9,000 Days, the title of which refers to the length of time Mandela spent in prison, by the South African group Overtone with Yollande Nortjie, is featured in the soundtrack (the music in the film).

The title of the film – Latin for unconquered – is drawn from a poem by the 19th century poet William Ernest Henley that in the film Mandela gives to the Springboks’ captain for inspiration. In reality, Mandela did find inspiration in the poem while in prison but instead gave the Springboks’ captain a passage from a 1910 speech called The Man in the Arena by US president Teddy Roosevelt.

Out of the night that covers me,
Black as the pit from pole to pole,
I thank whatever gods may be
For my unconquerable soul.

In the fell clutch of circumstance
I have not winced nor cried aloud.
Under the bludgeonings of chance
My head is bloody, but unbowed.

Beyond this place of wrath and tears
Looms but the Horror of the shade,
And yet the menace of the years
Finds and shall find me unafraid.

It matters not how strait the gate,
How charged with punishments the scroll,
I am the master of my fate:
I am the captain of my soul.

Vocabulary from the poem:
fell (dreadful, cruel)
clutch (strong hold, grip)
winced (flinch, draw back from fear of pain)
bludgeonings (heavy blows or hits)
unbowed (not lowered)
wrath (anger)
looms (action to describe the taking shape of an impending event or the coming closer of something of impressive size)
menace (danger, threat)
strait (narrow – not the same as straight, which means without bend or curve)
scroll (list or roster)

If you see the film, let us know what you think of it!

Why users still use to read news papers when in this technological globe everything
is accessible on net?

Yes, an magnificent CREDO which was a challenge because of the wide atmosphere in South Africa at that time and a possible civil war.
In his biography ” Mandela’s way: Fiteen lessons on Life, Love and Courage ” by Richard Stengel , director of Time’s publication, M.Mandela told about this particular experience. But may be more interesting, he talked ( the book is an interwiew too) , the way he managed to obtain a gain with the worst director in the worst South Africa’s prison by speaking rugby and africaans language ( the both were symbols of Africaner domination ).

Thanks Brian for your advices

I read in French some years ago some novels by Nick Hornby and I bought “About a boy” in the Penguin active reading collection level 4 ( I mixed some books in full english and collection like these one from Macmillan, to Penguin and another ; a very good advice you gave us last year ) ; for example, there are Cdroms with the Nick Hornby ‘ book and exercises too!

i don’t know Tracy Kidder ; thanks to this opportunity of reading.

During our private lesson last summer,Gerry gave me a very interesting author to progress in this way : Daniel Silva .
His main character is a mainly art restorer and sometime an israeli spy : “the english assassin ” I am reading now, is particularly rich in phrasal verbs and may be I am going to write again the book with all my notes ! Fascinating adventures and easy to read.

Just about anything written in a fairly informal tone will have lots of phrasal verbs. To give two examples, Nick Hornby is a British novelist who is a master at creating smart, funny dialogue — try High Fidelity or About a Boy, both of which were made into films. A non-fiction writer who comes to mind is Tracy Kidder, an American Pulitzer Prize winner whose book Mountains Beyond Mountains tells the story of Dr. Paul Farmer, the “Man Who Would Cure the World,” through interviews and thoughtful description.

May be, Brian, you have some books especially rich with phrasal verbs to recommend ?

Thanks, Jean-Marc, for your recommendation of Nelson Mandela’s autobiography and also for that great quote from Mandela about learning English.

Thanks Brian for your clever and finesse explanation. So let’s go to phrasal verbs! I like very much their rhythm too…

Concerning M. Mandela, I read his autobiography a long time ago ( published in 1996 ) , it is an extraordinary book; he wrote it when he was in prison at Robben Island and during this period, he learnt english.
He had some important comments between people who learn english and succeed : ” they never give up even after many years .That’s their secret of success”.

I never forgot his words.

If somebody wish to read it ,there is an excellent synthesis on this website:

Thanks, Jean-Marc, for your valuable observation about the difference in tone between phrasal verbs and their one-word synonyms. Phrasal verbs, based as they usually are on short, one-syllable verbs with Germanic, Old English roots, tend to be informal and colloquial. For example, if you hear that a scheduled meeting did not take place, you could ask: “Was it called off or put off? Or did no one show up?”

If you were asking the same question in a more formal way, you might say or write: “Was the meeting cancelled or postponed? Or did no one appear at the scheduled place and time?” The short verbs call, put, and show evolved from some of the most ancient words in English and are therefore more common in everyday conversation, while cancel, postpone, and appear all come from Latin and have a more formal tone.

If you’re a French, Italian, or Spanish speaker, for example, you probably find it easier to use the Latin-based words than the Old English words, but if you want to understand and use English vocabulary in everyday conversation and informal writing, it’s worth your effort to learn the phrasal verb equivalents of the more familiar Latin-based verbs.

Thanks a lot, Brian, for this amazing blog,the time you used for,rendering easier as usual some difficult points ,with your learning process, these terrifying phrasal verbs !

But I have a question: is there a particular goal in english to apply phrasal verbs and precise verbs . Is it a more daily use for the first and a writing, intellectual use for the second ?

For example, I am reading two books : the first by Jim Harford ” The logic of life” or how an economist explains the way we deal our decisions every day ( fascinating book ). He uses more phrasal verbs than the second : ” Brain rules” by John Medina , a scientist in molecular biology , ( 12 principles for surviving and Thriving at work, home and school) : amazing too!

The first is ( according my personal views ) a little bit more popular.

this is a great idea…!!! I like that….becouse, we can practice our english with actual topics….

A magnificent CREDO. It says everything about how one should live – with courage and conviction!