Film Director Guy Ritchie’s new take on the iconic 19th-century English detective Sherlock Holmes was released on Christmas Day in the USA. While preserving some of the brooding (preoccupied with morbid thoughts) aloofness (emotional distance, reserve) and bohemian (unconventional, anti-establishment) eccentricities of the character as seen in earlier film versions dating back to the Basil Rathbone series of the 1940’s, this new version of Sherlock Holmes, starring Robert Downey Jr., presents us with a scrappier, funnier, and more vulnerable mastermind.

The scrappiness (fighting spirit) comes into play when Holmes shows off (exhibits) his skills as an expert bare-knuckle (no boxing gloves) boxer and inventive street brawler (disorderly, unruly fighter) in several scenes that pit him against (find him confronted by) opponents nearly twice his size. The idea of investing Holmes with boxing prowess (bravery, ability, strength, especially in battle) comes straight from the pen of Sherlock Holmes’s creator, the author, athlete, spiritualist, and amateur detective Sir Arthur Conan Doyle.

The vulnerability (susceptibility to being hurt) is seen in his emotional dependence on his friend Dr. Watson, played by Jude Law, and his confusion when ensnared by the seductive Irene Adler, played by Rachel McAdams.

The humor comes occasionally from the repartee (quick, witty replies) between Holmes and Watson, but more often from the clever and eccentric way that Holmes extricates himself from the most dangerous predicaments, as when he hides himself from his enemy in the smoke of a fireplace and then launches himself out of the window of the Houses of Parliament into the River Thames. The first part of his anatomy that resurfaces is not his head, gasping for air, but his extended right hand

holding the pipe he was anxious to keep dry. 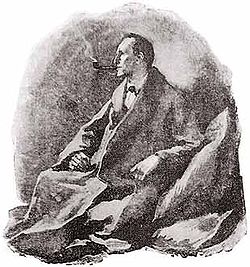 Susan Wloszczynza of USA Today gives us a fascinating backstage look at the making of Sherlock Holmes, describing the conversion of a Brooklyn, NY, armory into a 19th-century English gentleman’s flat and revealing that both Downey and Law pored over (read or studied intently) Doyle’s writings to extract what they dubbed (called) Doyle-isms — characteristic expressions that would lend color and authenticity to the dialogue.

The language of the film, while occasionally formal in tone in keeping with the time period, is fairly straightforward and not too slang-heavy, making it a good choice for upper-intermediate to advanced-level speakers of English.

If you see the movie, leave a comment here telling us what you think!

Thank you so much for sharing some of your work with me! This website on Sherlock Holmes looks great! And I must say that the new Sherlock is much sexier (does the word exist, teacher?) than the previous one! I’ve never really felt interested in detective stories before (I have a Sherlock Holmes movie that I never watched to the end, shame on me!)But I must say that after watching the film review, it could be a good action movie, with more witty dialogues that the usual silly action movies…And I’m sure that my students would love such movies! I will soon study cinema with my 14-year-old students, so I will try to use this site! And I’ll spread the word about your center whenever I have the opportunity.
Bye now,

Yes, this blog is an excellent idea, and the links are great.
But with regard to the Conan Doyle’s character, I prefer the more complex Americans Sam Spade (Hammet) and Phillip Marlowe (Chandler), and the Europeans Wallander (Mankell), Jaritos (Markaris) and Montalbano (Camilleri).
Congratulations for the idea, Brian, and thanks a lot for the suggestions. I’ll see the film.

What a good idea, Brian, this blog with a first subject on probably one of a blockbuster in 2010 ( winner of ist first week-end just in front of “Avatar”) ; i’m going to see it when it’ll release at the begining on february , in France.

Why? Because, Sherlock is a myth , of course and a good friend of mine as a reader when i was a teenager ! Secondly, because i don’t doubt that Guy Ritchie has created a particular atmophere in terms of language, set, colors and his way to tell the story .
Thank you too for the links with the red sentences and their richness of content. Magical!