Who is the English language student’s enemy number 1? 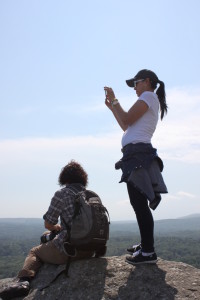 Prepositions are small but pugnacious, refusing to fade into the background.

Prepositions laugh at translation (that’s laugh at, not laugh with, because it’s not a friendly laugh). Depende de in Spanish. De = of or from in English. So, it depends of the context, right? Wrong. It depends on the context.

The choice of preposition can be based on the word before and the word(s) after. You work in an area of expertise, for a company, with colleagues, and on a project. You work, for example, in pyrotechnics, for Up in Smoke, with your fellow pyrotechnicians, and on the Great American Fourth of July fireworks display.

Prepositions depend on other words for meaning, and yet, in what are known as phrasal verbs, if you change the preposition, you totally change the meaning of the verb that precedes it. Sadly, when it comes to (talking about, referring to) prepositions, no one has yet come up with (invented) a magic spell to instantly know them all, or come across (find, often when not actively searching for something) a secret key to unlocking their mysteries.

Prepositions are proudly defiant of our awkward attempts to master them, like wild mustangs.

So how do we learn them?

And what is the best way to learn vocabulary? Not from a list. Leafing through several pages in the dictionary trying to learn all the phrasal verbs using the word get will get you nothing but sad, mad, and bewildered. Much better to learn them in context, reading (or listening to) things of interest to you, and observing how prepositions are used in the real world.

To illustrate, let’s look at six selections from one of The Guardian’s gallery of amazing photos from around the world, and see how prepositions – free spirits that they are – roam into and around the captions.

Mumbai, India: Rose petals and coloured powder are showered on a huge idol of the elephant-headed Hindu god Lord Ganesha during the 11-day Ganesh festival.

On can have the physical meaning of on top of.
Of follows the idea of representation as in a picture of, a copy of, etc.
During with an event: during the concert, during the meeting. Use for, not during, with a time period: We stayed there for two weeks.

Kunming, China: A butterfly perches on a boy’s face at a butterfly exhibition.

On: the physical meaning of on the surface of something.
At: during is also possible with an event, but during can emphasize something of relatively short duration (like the shower of powder in the first photo) occurring in the context of an event of much longer duration (an 11-day festival). For another example, see the use of during Catalan elections in the next caption.

Barcelona, Spain: A dog waits outside a booth at a polling station during Catalan elections. Pro-secession parties say they will push for independence within 18 months if they win a majority in the 165-seat parliament.

Outside: Opposite of inside the booth, where the dog’s owner is voting.
At: A specific geographical location.
For: The go-to preposition for purpose or objective.
Within: No longer than. To indicate the maximum time period from now into the future.
In: In a group.

Fribourg, Switzerland: Guillaume Rolland, a professional mountaineer, balances on a highline on top of the Moleson mountain at 2,000 metres above sea level.

On: Physical meaning (see above).
On top of: Physical meaning.
At: For a specific point on a scale, as in Water freezes at 0 degrees Celsius.
Above: Above and its opposite below are used for numbers on a vertical scale.

Brussels, Belgium: A statue is silhouetted against a supermoon.

Against: Indicates contrast or opposition.

Zhodino, Belarus: Up to his eyes in muddy water, a man takes part in an extreme run competition.

Up to: As high as.
In: Physically inside a substance (muddy water), or in an event with the emphasis more on participation than time.

I don’t know of a phrasal verb app, but in acquiring any vocabulary, including phrasal verbs, I recommend learning the new words or phrases in context, through reading and listening.